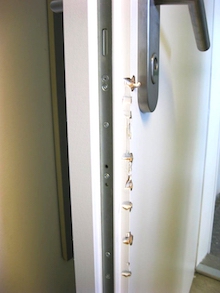 Frankfurt/M.  May 2017. In the last ten years, the number of burglaries in Germany has steadily increased. According to the Federal Criminal Police Office (BKA), the figures for 2016 have fallen by 9.5%, compared to the previous year. However, the risk of burglary in one's own home should not be underestimated.
The recently published criminal statistics published by the Federal Criminal Police Office (BKA) for the year 2016 shows that in the past year 151,265 break-ins were registered nationwide. The clearance rate of these crimes is only 16.9%. In comparison to the previous year (2015: 167,136 cases) the figures represent a decline of 9.5%.

"For the first time in the past 10 years, we are seeing a decline in the number of burglaries in the Federal Republic. We believe that these success figures are also due to the increased use of physical security products and burglar-resistant construction products, "says Dr. Markus Heering, Managing Director of the European Certification Body ECB in Frankfurt. "Nevertheless, we are not expecting a trend reversal, as we are still recording more burglaries than five or ten years ago."

Windows and doors are known to be the weak points of every apartment and house. The lack of security systems in these places, provide a perfect and easy entry for any burglar. Entrance doors can be opened in seconds with a screwdriver and usual window constructions can be easily levered - almost without damage.

Burglar-resistant windows and doors are subjected to a professional burglary test according to EN 1627 in order to ensure that all components of the construction are aligned and provide adequate protection. Among others, ECB provides certification marks for these burglar resistant construction products which require a particularly high processing accuracy in the production in order to ensure that all products are manufactured exactly according to the corresponding test pattern. ECB therefore places special emphasis on the fact that the production is subject to ongoing external monitoring by means of regular inspection tests.

Do I have to be an ESSA member to become an ECBS certificate holder?

Has your question not been answered by our FAQs yet?

How do I find out the certificate holder of my safe?

Up to what value is my safe insured?